Well over the spring I finally ditched my broken T-mobile phone and got the new HTC Incredible from Verizon. Not to quote McDonald’s but I’m loving it! This phone is awesome and so are the apps available for it. I found a fun app you should all check out called Devilry Huntress. This game is so addicting! The basic concept is similar to games like Jewellust or Bejeweled. However this game has a totally spooky theme and creepy animated characters. With character symbols such as skulls, blue spiders, haunted pumpkins, vampiresses, and zombies, you can bet this game satisfies the Halloween and horror fan! END_OF_DOCUMENT_TOKEN_TO_BE_REPLACED

If your itching for a good read, then you’ve got to try “The Dunwich Horror” by H.P. Lovecraft. It may have been written in 1928, but this short story is fantastic and feels very scary. Lovecraft can wrap you up into his world with vivid descriptions and wicked storytelling. He admitted borrowing some of his story ideas from other horror writers such as Edgar Allen Poe, but most of his inspiration was from his own hellish nightmares as a boy. Cult horror movies such as Reanimator and From Beyond were both based on stories written by Lovecraft. As I read through “The Dunwich Horror”, I can’t help but wonder if other horror flicks used Lovecraft stories for inspiration. For example, when he describes the exploded timber that has a black tar-like stuff from Wilbur’s barn, I thought of the black tar in the basement of the house in the 1979 movie, The Amityville Horror. Coincidence? maybe… The description of the gateway where horrid creatures from the underworld enter to wreak havoc on earth reminded me of the 1987 movie The Gate. Even Wilbur Whatley’s physical description totally reminded me of Calibos from the original 1984 version of Clash of the Titans.

And of course there’s the Necronomican, (Book of the Dead) described first in this story, and totally borrowed for The Evil Dead series of movies. Definitely do yourself a favor and pick up this or any other H.P. Lovecraft story. 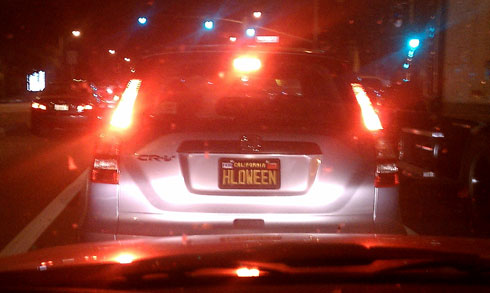 Sometimes you’ll be in the weirdest place and will spot something out of the ordinary. Like this license plate! After I snapped it, I tried to catch up to see if the driver was a grotesque zombie or maybe a hairy werewolf. Nope, just a fat bald guy.