Well I hope you’re all enjoying what’s left of your Halloween candies. No matter how good or bad things turned out during Halloween, I always get a bit sad to see it all end. Now that it’s November I finally have some time to look through blogs, organize my pictures, and just unwind a bit. As I was searching around the internet I found a few funny Halloween related items that I thought I’d share. I hope to do this more often and will call it the Friday Funnies. Enjoy! END_OF_DOCUMENT_TOKEN_TO_BE_REPLACED

Hey fellow ghouls! This year I decided to create a Halloween advent calendar just for fun. I wanted something to help remind me of all the cool things to do during my favorite month. I’m calling it The October Calendar. You can click on each day and a surprise will be inside. You might find ideas for activities, food and treats or spooky Halloween quotes. Let me know what you think of it.

Here’s the link: The October Calendar

Did you see that? A slight movement in the photograph…almost as if it were haunted. Don’t be frightened, it’s just a cinemagraph. Cinema..what? Don’t worry, I didn’t know what they were until just recently. “Cinemagraphs are still photographs in which a minor and repeated movement action occurs. The term “cinemagraph” was coined by U.S. photographers Kevin Burg and Jamie Beck, who used the technique to animate their fashion and news photographs beginning in early 2011.” END_OF_DOCUMENT_TOKEN_TO_BE_REPLACED 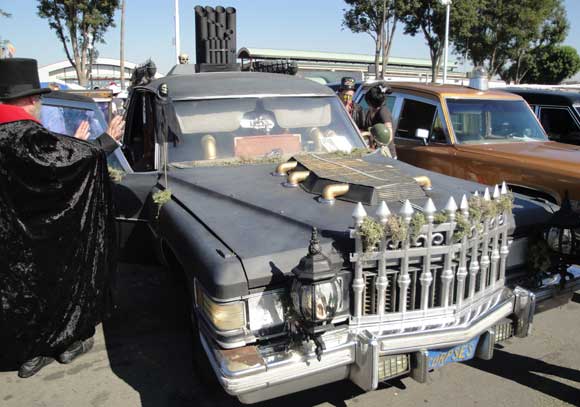 Every weekend you can find a classic car show somewhere, but it’s not every day you can see a classic hearse show. Sunday I ventured out to Orange County for the annual OC Trick Or Treat Festival. In a little corner of the marketplace those classic creepy beauties where all lined up. To truly appreciate the restoration you have to check out the details up close including the interior. For example, the hearse above had a church organ inside. (You can see the top of the organ pipes coming out of the car). Here are some of my favorite hearses from the event. END_OF_DOCUMENT_TOKEN_TO_BE_REPLACED

What is it about those nostalgic traveling circuses and carnivals of the mid 19th to mid 20th centuries that spark my curiosity and imagination. Perhaps it is the man at the booth that draws attention from the crowd by promising to show the most bizarre biological rarities ever seen. Yes, I’m talking about the freak show. These shows would put a group of people or animals on display that had bizarre and very rare physical conditions. If you want to see for yourself, check out Tod Browning’s iconic horror film from 1928, “Freaks”. Of course in today’s world, it’s offensive to label someone a “freak”. And so as public opinion changed on the topic, these sideshows became an element of the past. However, the freak show has become popular once again. Not with the mainstream, but with a new subculture of people who are carrying on the tradition. For example, in California you can visit the Venice Beach Freakshow. The place is small, but it’s packed with cool stuff to look at. It mostly features animals with more than the usual number of body parts… like lizards with two tales, or a turtle with two heads. There is a guy who can swallow swords, balloons, and I don’t want to know what else. There are also a few traveling sideshows such as The FreakShow Deluxe a carnival style sideshow. These guys have it all…magicians, sword swallowers, knife-throwers, fire-dancers, burlesque performers, and of course human anomalies! The FreakShow Deluxe will be performing at 10am October 30th at the OC Marketplace in California.