Well I hope you’re all enjoying what’s left of your Halloween candies. No matter how good or bad things turned out during Halloween, I always get a bit sad to see it all end. Now that it’s November I finally have some time to look through blogs, organize my pictures, and just unwind a bit. As I was searching around the internet I found a few funny Halloween related items that I thought I’d share. I hope to do this more often and will call it the Friday Funnies. Enjoy! 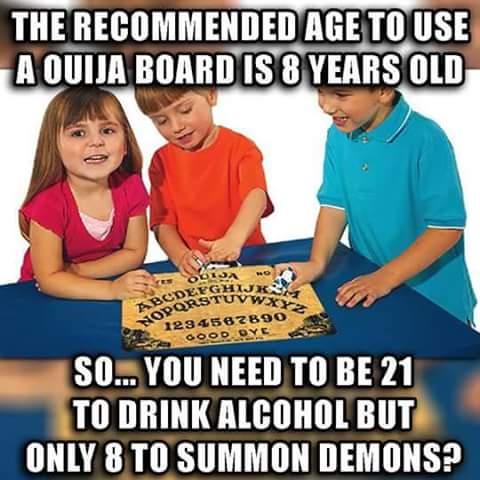 This is pretty hilarious because if you look at the Quija Board sold in most toy stores it is clearly marked on the box “8 years and older”. I wonder how they came up with that rule? Did they test a bunch of kids in a focus group? “Hey kids, now that you’re done playing with those dinosaurs, we want to see what you think you can do with this board that talks to devils”. I’m imagining two men in white lab coats observing the kids and writing notes on a clipboard. “Yes Frank! These children are successfully communicating with ghosts. I think we’ve found our appropriate age group for this product!” Or something like that! Pretty weird!

So I found this sad little faced pumpkin in a Facebook post from a former co-worker. I thought it was hilarious and really wanted to know more about it’s story. I don’t know who carved this, but I’m hoping it was a little kid that really gave it their best effort. If it was anyone else, then wow…I don’t know if any less effort is even possible.

Found this also through the So Cal Valley Haunters Facebook group. This image is so true! After reading the candy giver type descriptions I realized I’ve been a Cheapy McCheapface for many years! My goal is to switch over to the Trusty Provider and stay there. I don’t make enough money to ever be The Legend (but sure appreciate those crazies who do)!

So last year the day after Halloween I decided to go for a bike ride. I rode mostly through the neighborhood and lo-and-behold there was forgotten candy everywhere. Almost like being at the scene of a fresh animal kill. The candy carcasses were still fresh, sweetness lingering in the air. Grass was trampled on and there were random unopened candy left here and there that kids must have dropped as they were racing from house to house. I felt a little odd about picking them off the ground. I was like the hyena after the kill looking for the final scraps of Halloween. If you’re a little low on sugar you might want to take a walk through your own neighborhoods and see what you find on the ground! Well hope you enjoyed!