Like most kids who lived in Southern California in the early 80’s, I grew up watching horror TV’s hostess with the mostest Elvira. I loved Elvira and still do. Last year I learned of another such TV horror host that was slightly before my time but every bit as influential. His name was John Zacherle but most people knew him as Zacherley The Cool Ghoul.

In 1957 Zacherley was chosen to host the horror TV show “Shock Theatre” in Philadelphia. For the role Zacherley parted his hair down the middle, applied ghoul-like makeup to his face, wore a long black trench-coat and went by the name Roland. He spoke in a ghoulish voice and introduced a different horror movie during each show. He always did something wacky and off-the-wall which is what attracted his many young fans. Apparently he was the pioneer of a new type of comedic satire called the “break-in” or “jump-in”. While the movie was playing, he would insert himself into the actual film. It was hilarious! I remember a big part of why I thought Elvira was so funny was when she would interrupt the movie to react to a scene usually in a very sarcastic way. It was so funny!

The show was a hit and Roland’s popularity grew by leaps and bounds. During this time he recorded an rock song called “Dinner with Drac” that became an instant hit. Then all of a sudden he moved to New York and was offered a chance to host Shock Theater on WABC. He was no longer Roland but was now known as The Master Ghoul Zacherley. He hosted more Universal horror films from a studio stage complete with skulls, lab equipment and crypts. He had wonderful improvisational skills and a marvelous sense of humor. It was evident from the various themes he incorporated into each show. The break-ins were as inventive and hilarious as ever.

For example, “During The Raven, Bela Lugosi is on the phone with one of his colleagues in the medical profession and refuses to offer his services as a surgeon. Finally he asks, ‘who’s on the case?’ We hear the muffled reply, ‘Zacherley and Gasport’. Lugosi’s answer, ‘I’m satisfied. They can handle it as well as I can.”‘ 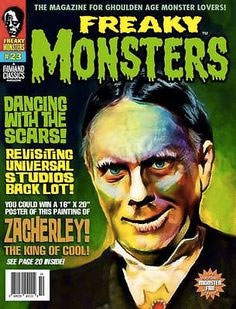 At this point, Zacherley was a household name. He made several appearances on other TV shows. He also appeared as a pictorial in issue #4 of Famous Monsters of Filmland. He made several personal appearances at large theaters where he entertained fans and signed autographs. He had also moved to Channel 9 which unfortunately did not have the budget for good stage props. However he continued with his signature break-ins and kept fans roaring in laughter.

Zach would occasionally be a guest on American Bandstand usually around Halloween time. In fact during the early 1960’s, Zacherley filled in for an ailing Dick Clark during their promotional “Caravan of Stars” bus tours. He hosted several other shows with the same characters he had created a decade earlier. He eventually left television and over the next 15 years he became a radio personality. He continued acting, doing special Halloween appearances, and hosting radio shows throughout the 80s and 90s. He achieved pop culture fame on the east coast that few people ever attain. I’m sad that I’ve never gotten a chance to see his many hilarious skits. I’m sure I would have been a fan from the first day! It must have been so fun to grow up watching him.

A vintage video collection of Zacherley

One of the most impressive explanations of the impact that Zacherley had on kids that grew up watching him was written beautifully by David Colton. For those that didn’t get the chance to watch him on TV like me, read this article and you’ll get a glimpse into why he was so popular. Today is the anniversary of his death. He died last year on Oct 27th, 2016. Farewell sweet prince of darkness and from your many fans new and old, thanks for the memories!