On any given weekend in October I’m usually rushing to build some kind of Halloween prop for my yard haunt. You know what really motivates me to work? Sounds weird but I love listening to either ambient Halloween music or a creepy old horror movie playing in the background on TV. It really gets me into the “spirit” of the season. Last weekend I watched several movies and decided to start doing a new series for the Ghoulie Guide called Horror Movie Roundup. In each roundup I’ll discuss the cool, creepy and just plain weird parts three horror films. In this debut episode we’ll talk about The Fly (1986), Carnival of Souls (1962), and The Omen (1976).

The 80s version of The Fly is much more grotesque and bloody than the original film. You know, the black-and-white film where that little fly is trapped in the spider web and shouts out “Help Me! Help Me!”. What the 80s version of the film lacks in dialog and originality is more than made up for in it’s use of special effects. In fact during the 80s, The Fly made many appearances in the horror film magazine Fangoria. I remember seeing disturbing images of a half-man half-fly monster on the magazine cover. It was really gross, and I was immediately intrigued.

At a meet and greet mixer, Seth Brundle (played by Jeff Goldblum) meets a journalist named Veronica Quaife (played by Geena Davis). He starts talking really nerdy to her and somehow it works because in no time they’re both heading back to his place. They drive up to his “home” which is in an old abandoned warehouse. (If a guy brought me to a warehouse like that I’d be running as fast as I could in the opposite direction!) But Veronica is obviously into Seth so she follows him in. Seth explains that this is his laboratory where he both lives and works. He obviously doesn’t clean because the place is an utter pigsty. Veronica still doesn’t leave and they wind up spending the night together. 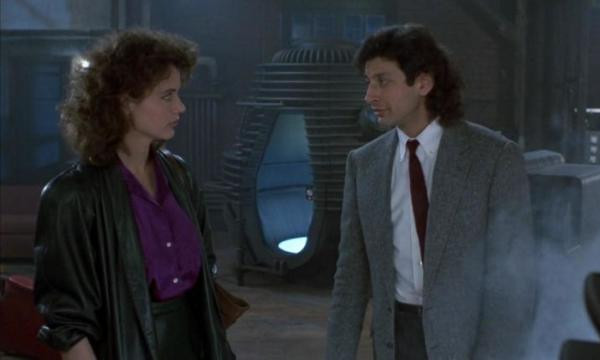 You know what really gets Veronica hot? Seth’s telepods! I’m talking about the two telepod chambers in his living room that are used to transport objects from one to the other. (Get your minds out of the gutter, guys!) Seth explains that the telepods only work with inanimate objects. When he tries them with living objects, the outcome is pretty awful. Like the poor baboon that after being teleported is completely turned inside out. Yeah…pretty freakin’ disgusting! And again, good old Veronica is not turned off by any of this. She is so excited that she volunteers to act as a reporter for his experiments and agrees to document everything. After one of their romantic interludes Seth begins cooking steaks and decides…”hey why not throw these into the telepod”?

The real twist of this film is when Seth gains so much confidence in his invention that he puts himself inside a telepod chamber. What he doesn’t know is that a fly slipped inside the transmitter pod without him knowing. Whoops! After his successful experiment Seth begins experiencing strange behavioral and physical changes. He seems to now have increased stamina, strength and sexual potency. (He could have just used Viagra). He doesn’t realize he’s changing until other more terrible changes begin to occur. Once his fingernails start falling off, his face starts to deteriorate and he starts vomiting on his own food, he figures “Ok, maybe something might have gone wrong”. As for Veronica, well, there is only so much a girl can take before she calls it quits. The plot gets more complicated when she finds out she is pregnant with Seth’s baby…or larvae? Seth tries to find a way to reverse the outcome to no avail. He goes through the metamorphosis of changing from a human into a fly. It’s kind of a sad change and is very symbolic of the diseases that cause physical deterioration such as AIDS or cancer. At first your rejoicing with Seth and thinking how cool it would be to have that kind of almost superhero strength but then quickly realize that a terrible outcome is near. In the end there is only one way out for poor old Seth. 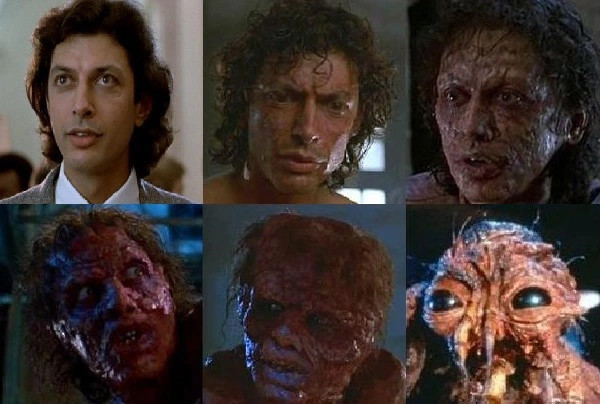 The film is great in the aspect of monster makeup and special effects. His physical changes look very believable and outright disgusting. The 80s version of The Fly is a good horror mixed with Sci-Fi film to make you feel just a little uncomfortable.

When I started watching Carnival Of Souls I couldn’t get over the WEIRD background music. It definitely sets the tone for this strange dream-like tale of horror. Carnival Of Souls is sort of a slow film and shot really weirdly. (I’m not a film buff so I don’t know how to accurately describe this but you’ll know what I’m talking about when you see the film yourself.)

Drag racing must have been popular in the early 60s because three girls driving on the road accept a racing challenge from three assholes in another vehicle. The girls loose control of their vehicle and the car launches off the bridge and plunges into the water below. It sinks and you’re left thinking wow, they all just died! As the police are pulling up the remains of the sunken car onlookers are amazed to see a lone survivor named Mary Henry emerging from the river.

After these dramatic events Mary gets a job in another city as a church organist. As she’s driving away from the church she realizes she can’t hear anything else but creepy organ music on the radio. Mary notices an ominous pavilion in the distance that seems to beckon to her. All of a sudden she sees the death white face of a man in the side window almost causing her to crash. She pulls into a gas station and asks the attendant about the pavilion. He tells her that it is an old bathhouse, dancehall and carnival that has long been abandoned.

She decides to move into town and rents a room in a boarding house. Unfortunately the other boarder in the house is a pushy pervert who doesn’t take no for an answer. I mean this guy is nothing short of a future rapist. After several lustful attempts he makes you’ll want to hit him over the head with a shovel yourself. As if she didn’t have enough trouble already Mary starts witnessing an apparition that appears to her in the church and boarding house. She is convinced that the creepy old carnival must be somehow connected to all of this and decides to visit the old bathhouse to investigate. Of course you can expect she’s going to find something terrible there waiting for her.

Yup…she finds something terrible alright. The creepy dead man accompanied by his troupe of ghastly ghouls. Mary tries unsuccessfully to escape the dead ghosts. All of a sudden she wakes up. Could she have been dreaming about all of this? Poor Mary is drawn back to the pavilion where she witnesses the dead ghouls dancing. She sees a dead version of herself dancing with the scary dead white faced man. She runs again for her life and the ghouls chase her down the beach. 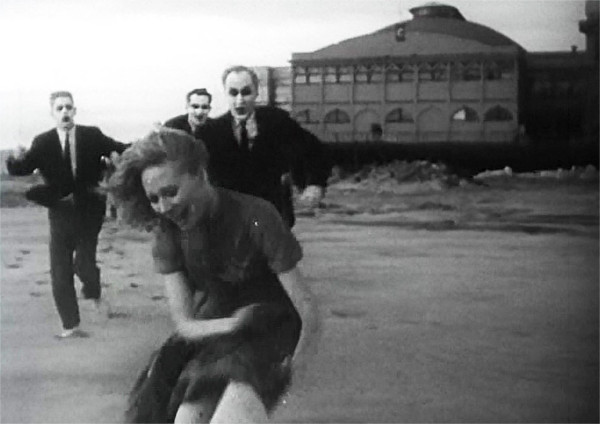 Okay as if this whole review wasn’t enough of a spoiler alert already, the final scene is a shocking twist. Mary has disappeared and the minister, doctor and police see evidence of her footprints in the sand that lead into the ocean. There are no other footprints around. In the final scene a car is located and pulled from the river. Mary’s body is in the front seat along with the two other women from the beginning of the movie. WHOAH! This film’s twist is good as is the story. However the film style is odd similar to other artsy films of the early 60s. Yet Carnival Of Souls has become something of a cult classic and a favorite film to show during the Halloween season.

When I was a kid I felt sorry for anyone named Damien. That’s because Damien was the name of the little boy in the film The Omen that turns out to be the antichrist. Yeah, he’s a demon. He’s that kid that has the innocent smile but as soon as you turn your back he’ll kill you. So many people were familiar with this little monster because The Omen was one of the highest grossing films of 1976. It even earned two Academy Award nominations and won for Best Original Score.

Let’s get back to why this kid is so weird and scary. First off, his mother is unaware that he isn’t even hers. While she was giving birth to her own son, the baby died. Her husband played by Gregory Peck conspires to adopt an orphan baby from the same hospital so his wife won’t ever know. That sucks! So as little Damien grows up strange events occur. First off, there is a big angry black dog that keeps showing up around Damien’s home. Then during one of Damien’s birthday parties a maid calls out to him and hangs herself in front of all the guests. Suddenly a new nanny shows up at their house offering to take care of little Damien. The parents are confused and don’t even like her but eventually accept her in.

Let’s be honest. Not many kids enjoy going to church every Sunday. But Damien takes his disdain for church to an entirely new level. As they approach in a car he freaks out and throws a tantrum like no kid ever has. His behavior should definitely raise a few eyebrows. A Catholic priest tries to warn Damien’s father that he might not even be human. Unfortunately the priest later becomes impaled by a lightning rod. Ouch that’s gotta hurt!

Good news! Damien’s mother is pregnant but not for long. In a pivotal scene while Damien’s mother is watering indoor flowers up on the second floor of her home he rides his tricycle right into her knocking her over the banister. She falls one story to the floor below and luckily doesn’t die but the poor unborn baby doesn’t survive. Guess this demon child doesn’t want any siblings. 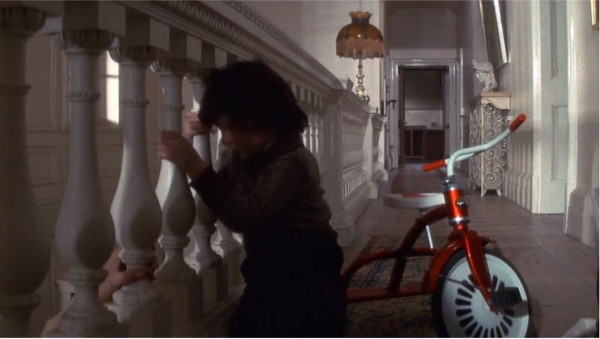 Damien’s father suspects something is very wrong with his son and travels to Rome to investigate Damien’s birth. He finds out that Damien’s natural mother was not human and learns that his own natural child was murdered so that Damien could take his place. He and a priest come to the conclusion that Damien is none other than the antichrist and a team of dedicated Satanists have been supporting him since birth. That explains the weird maids!

While Damien’s father is off playing Sherlock Holmes, his mother is in a hospital bed. Of course everyone knows that hospitals are the least safest place to be in any horror movie. The creepy maid visits her and throws her out the hospital room window. That’s it! This kid is toast! Damien’s father was instructed to look for a birthmark on his head. Not the thunderbolt mark Harry Potter sported around mind you but three sixes. That’s right. 666. Well, as plain as day Damien’s father finds them and proceeds to drag his brat back to church to kill him. As he’s raising the dagger over his screaming kid police officers order him to stand down. He refuses and shots are fired. So Damien lives and everyone else dies. Great kid, huh? The weird thing is that because Damien’s father was an ambassador the President of the United States now has custody of Damien. Great that’s all this country needs now. Another evil politician!