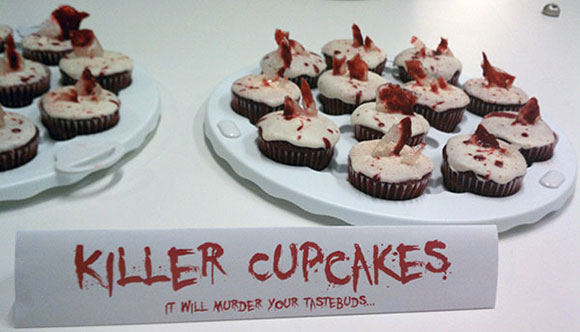 There are those who like to decorate for Halloween, those who enjoy making clever costumes, and then there are those that attempt to make food look as frightening as possible. If your lucky, you may be asked to participate in a creepy food contest, an event thats gaining popularity at workplaces all across America. You won’t believe the entries at my workplace this year.

Now if you haven’t participated in a creepy food contest, why don’t you try to host one? It’s so much fun to see how creative and weird people that you know can get when trying to come up with the scariest looking food. (Intentionally scary of course). Having a hard time coming up with an idea? Fear not…there are plenty of examples of creepy foods for Halloween on the internet. There’s even a Food Network special on the subject that airs every October. Well this year my workplace decided to host a creepy food contest for all us employees. I must say, I was surprised at how many people participated and really went out of there way. I’m sure it helped that there was an iPad up for grabs as first prize. There were a few entries that were cute, and a few that were possibly even tasty, but the ones that stole the show were the ones that were scary bordering on slightly weird.

First up we have the killer cupcakes. They look pretty ordinary…oh except for those large pieces of bloody glass sticking out of the frosting. Actually the glass is nothing more than crystalized sugar and the blood is red food coloring. These are truly creepy, especially for those of us that remember the reports of razor blades in Halloween candy back in the 80s. Eat these cupcakes with caution!

Next up is the creepy clown cake. As it is, clowns are terrifying. Some that come to mind are Stephen King’s IT, the clown from Poltergeist, John Wayne Gacy, the Joker…really the list goes on and on. This clown cake is freaky and even a bit artistic. Just look at those sunken eyes (I meant eye…the other is sort of just dangling). The blue hair is made from cotton candy, the red bloody brain stuff is made from Sour Strings. I’m not too sure what the rest of this guy is, but they tell me he is 100% edible. Yeah, I’ll pass. And then there is the Carrie cake not to be confused with a bleeding Barbie. Although this cake looks like a bloody mess, it was actually quite good. Just a white cake with white frosting and a TON of red cake gel. The bento demon is probably my favorite entry. I was assured that every item in this little masterpiece was edible and even healthy for you. The hair is seaweed and the tongue is salmon. I can’t even begin to guess what the rest of it is, but then again I can never tell what I’m eating in sushi rolls anyway. Finally there is the winner, the alien baby watermelon. It is gross, strange, bizarre…I don’t know how else to describe this one. I’ve seen all kinds of watermelon carvings on the internet, but this one is truly a first for me. The head of the embryo is made from a peeled apple. The umbilical cord and rest of the body…god only knows.