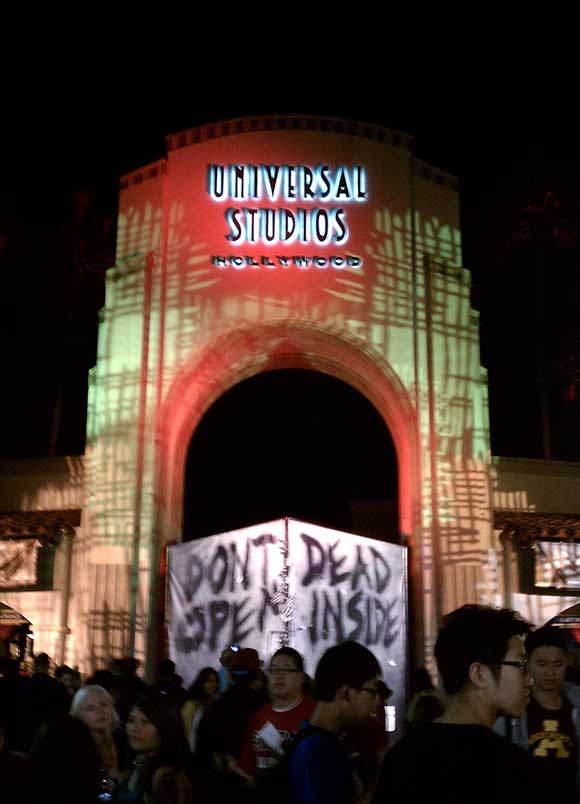 It’s no secret that the Walking Dead is a hit show for AMC and Universal Studios is jumping all over the bandwagon with this year’s Universal Horror Nights. Never before have I seen so many “walkers” (formerly known as zombies) roaming around a theme park. That’s right, I visited the park’s annual Halloween event last weekend and was quite surprised by all the attention to The Walking Dead TV show. These walkers were scary, had great makeup, and snarled just like the ones on TV. But then again, if anyone can do monsters right, it’s Universal. After all they have the most classic horror monsters of all time remember?…Dracula, Frankenstein, & The Wolfman. Here’s my review of the mazes, monsters, and decor this year with some pretty awesome pics too.

Let me start by saying I had no special privileges at the park (although I was seriously considering upgrading my free ticket to a Front of the Line pass). When we first arrived and entered the park the lines were relatively short. Unfortunately that didn’t last long at all. After standing in some long lines waiting to get scared I felt like a walker myself. Well more like a stander cause I wasn’t doing much walking. But before I complain, let me rewind to the beginning of my experience. As we entered the gates, we were immediately greeted by walkers with chainsaws. And they were chasing everyone entering! I don’t really get scared but there is something quite unnerving about someone chasing me with a loud electric hardware tool. Just past the chainsaw walkers were pyrotechnic displays spitting out huge plumes of fire while hard rock music played on loud speakers. Talk about pumping you up! The first maze we experienced was the Universal Monsters walk through. It was pretty cool, but the Dr. Frankenstein’s Lab was absolutely amazing. Not only was there crazy blue and green laser lights flashing around this massive structure, but Dr. Frankenstein himself was acting as a DJ spinning some mad hits for the occasion. This line moved extremely fast and the walk through was very satisfying. We decided to try the Universal Tram Tour next. I was amazed that it only took 5 minutes to board the tram. As we drove through the backlots we were shown commercials about The Walking Dead on the overhead TV’s. I was expecting that monsters would jump out at us while we were riding the tram. Instead the tram suddenly stopped, the host with the microphone told us “Good luck, I hope you survive” just as the tram doors opened in front of a line of walkers dressed in police riot gear. Everyone started running from the tram through the walkers blocking the entrance to the maze. It was a totally surprising twist on events so naturally we ran too. Past the first set of walkers were some pretty elaborate sets. The scene was a burned down neighborhood with the crash remains of a 747 commercial airliner. Not too sure how a disaster like that fits in with Halloween and zombies, but there were plenty walkers roaming around the crash scene looking for survivors to eat. Further on, was the Bates motel. Now if you’ve ever been on the Universal Tram tour during the rest of the year, you only get to see the Psycho House from a distance. Today we were able to walk right up to the front porch and take a picture with Norman Bates holding a knife to my throat. It’s funny that Halloween is the only time of year this sounds like a good idea. As for the rest of the maze, it was equally fun with plenty jump scares and monsters. I would say this the best Halloween attraction at the park. Deciding to take a break from all the walkers, we moved on to the clown carnival area. If you suffer from coulrophobia, (Fear of Clowns), then this area is not for you! It was dark, had lots of fog and eerie carnival music, and was full of killer clowns. At the end of the street Chucky (the evil doll from the Child’s Play movies) was perched in a 2nd story window shouting down at guests and doing his best to offend them. Wow…and were his jokes ever raunchy. Since we were having good luck with the lines, we decided to attempt The Walking Dead maze (different than the Walking Dead Tram Tour I described earlier). I figured we’d knock out the longest line first so the rest of the mazes wouldn’t be so bad. HORRIBLE MISTAKE! Little did we know that the line was a 172 hour wait! OMG it was horrible. Universal did their best to make the line experience not so bad by showing clips of classic horror movies on a big screen and having food and snack stands close to the lines. But OMG…we waited, and waited and waited… And WAITED. It was ridiculous. When you wait for so long, you sort of go mad in thinking “Well, I’ve waited this long so I have to see what I’m waiting for even if it kills me”. The outside of the maze looked cool. They had recreated the West Virginia Correctional Facility … aka The Prison. But inside I was highly disappointed. There was nothing elaborate or interesting to make that insane wait time worth the effort. We wasted over two hours of valuable theme park time. My advice to anyone visiting is knock out the faster mazes first. You will feel like you accomplished more and wont get as tired or bored. After that experience we were pretty tapped out for the night. The other mazes wait times were so long at this point I said forget it, lets go home. More advice if you go, go early! Get on the shortest mazes first and take time to walk around since there is lots of great atmosphere and decor and monsters to entertain you outside the mazes. Oh and eat a funnel cake!