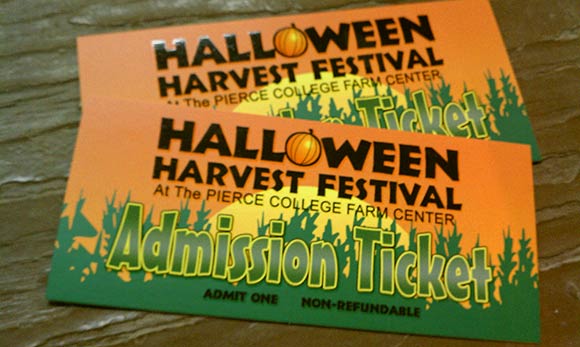 Halloween is not complete without a yearly visit to the pumpkin patch. Usually I try visiting a new pumpkin patch each year just to see how they all stack up against each other. But this year, time was short so I decided to head back to a patch I visited a few years ago… the Pierce College Halloween Festival in Woodland Hills. At the time I first visited, I was really impressed by how much they had to offer. But this year…whoah! I can’t believe how much they added. It is almost like a mini county fair now. You can wander in, walk through several rows of pumpkins and visit their farm stand for free. But past that you must pay a $5 entrance fee. However if you plan on buying tickets to any of their attractions, the entrance fee is included. We paid the entrance fee, and explored the festival grounds. Check out what I found and the animatronic creature in the corn maze that blew me away!

This place is super cool to visit during Halloween especially if you have kids. There are bounce houses, bumper boats, and a big hay tower kids can climb up and down. There is also multiple areas for petting baby goats. They have a few ostriches in cages you can view and some turkeys and chickens too. There was a gems and minerals area where you could pan for gold. This year they added an arts and crafts booth where kids can get a small pumpkin and paint them any way they like. (You can purchase activity tickets to do any of these items at the front gate). I was surprised by how many food booths they had at the festival. Lemonade, tacos, pizza, funnel cakes, bbq ribs, hot dogs, and even a caramel candy apple booth. Oh yeah and my favorites, roasted corn and kettle corn. I was totally ready to get my junk food on! The funniest thing I saw for kids was the Udder Milking Cow Barn. So you could walk inside and they had this fake cow with fake udders standing over a real bucket. Parents would direct their children to grab the udders and squeeze to make the real water come out of the cow. As the parents were making their kids pose for pictures next to the udders, I chuckled thinking how parents can capture humiliating moments like this on video.

Just then I heard Pat Benatar belting out lyrics from the song Heartbreaker. Well it wasn’t Pat, but a group of convicts and a police officer performing the song on the Festivals musical stage. They were pretty good and continued playing some great 80s tunes. The stage behind them looked like an old miners town. The whole festival actually reminded me alot of Knotts Berry Farm’s ghost town.

I couldn’t leave without at least walking by the Corn Maze and haunted house. I have been through both before which is the only reason I decided not to buy tickets for these. (Okay maybe it was more my being cheap that held me back from buying tickets). But as I walked up to the Creatures of the Corn Maze I kind of regretted not going in. At the front of the maze was this huge (and I mean huge) demon dragon animatronic figure. As people walked in it started moving and growling looking extremely menacing. Probably one of the coolest monsters I’ve seen in a haunted attraction! Off to the side of the corn maze was a headless horseman mounted and raising his weapon jack-o-lantern over his non-head. And that was just what I was able to see from the gate. Maybe next year I’ll go in to see what other cool creatures lurk in the maze. As always, here is the link to the Pierce College Halloween Harvest Festival.