OMG…if your a Horror fan, LEGO has just released one of the coolest toy series ever called “Monster Fighters”. This series is absolutely AWESOME and just debuted this May! Included in the series is a 3-story Haunted House complete with glow-in-the-dark ghosts, Vampyre and Vampiress and too much cool functionality and moving pieces to mention. Other sets in this series include a Vampyre Caslte, Vampyre Hearse, Ghost Train, Crazy Scientist and His Monster, Werewolf set, Mummy set, Zombie set, and Swamp Creature set!!! I want to collect all of them! But of course it’s going to take a little dinero to do so. The most expensive set is the Haunted House at $179 buckaroos. However, lots of other sets are pretty affordable, such as The Werewolf set for only $19.99. Or you can dive into the commitment of owning them all and purchase the LEGO Monster Fighter Collection for $296.94! Check out their website here for more info on all the sets for purchase. 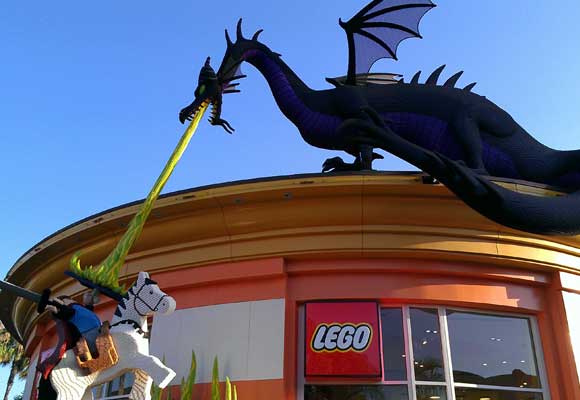 The timing of this new LEGO set is incredible. I had recently visited the LEGO store at Downtown Disney in Anaheim, CA and was blown away by the LEGO display they had set up outside the store. A fierce black dragon is blowing fire out at a prince who is trying to defend himself in the hopes of saving Sleeping Beauty. It was awesome! So much detail and color in the construction of this scene. It definitely got my attention, so I entered the store and quickly glanced at all the products. Harry Potter, Pirates of the Caribbean, Star Wars, Lord of the Rings, hmmm…I liked all of them, but was on the fence on which series would help me to accept the idea that I was actually going to buy a toy even though I”m a thirty-something year old female. It was then that I had the idea of how awesome it would be for LEGO to come out with a series based on the classic horror monsters or Halloween. I’d buy that in a heartbeat. Well the gods must have been listening, because a month later I had the shock of my toy life after seeing this Monster Fighters series in a TARGET store.

Yep, my teeth almost fell out of my mouth…(and i don’t even have dentures!). I stood there in amazement at the series that stood before me. A young kid strolled down the isle looking for a LEGO set after being pressured by his dad to buy something. “Hey kid! Can’t you see the all these Monsters Fighters on the shelf…pick that! It’s the coolest thing here!”, I thought. But the kid just grabbed a small robot looking package. Eh…this kid is too young to appreciate true toy mastery. Out of my way kid! After spending most of my lunch hour gawking at the products on the shelf and taking pictures of them. I raced back to work to check out the LEGO website.

The website transported me into the world of the Monster Fighters. As the story goes, Dr. Rathbone is trying to track down Lord Vampire and stop him from getting all the moonstones into one spot where he will turn daylight into night forever. Each moonstone has been hidden in the deepest darkest reaches of the Earth, such as the swamps, the grave, the evil forest. A monster lives in each of these locations and a human (correction…a LEGO human) Monster Fighter has been sent to each location to defeat the evil creature and recover the moonstone. The battle will be intense between the Fighters and the Monsters. The Monster Fighters website is full of information on each of the characters and has a great video on the backstory I just mentioned. Not only that, there is a cool website game you can play that involves all the characters and some other mini-games to check out too. Kudos LEGO for a job well done!

Me, being the take-forever-to-decide-something kind of personality, I still hadn’t bought a set yet. But we had already planned a trip to Legoland for the last weekend in September. So I figured I’d wait till then to buy something. After spending the day going on miniature rides and watching kids wipe their snot-ridden mitts over every touchable surface, I entered the massive LEGO store towards the entrance of the park. A quick scan and there they were…right in the middle of the store. Same sets offered at TARGET, same prices, but what was this…a HAUNTED HOUSE set! OMG…nerd/Halloween heaven! Didn’t see this at my TARGET. I snatched one up without even checking the price. A guy in line ahead of me started chatting about my purchase and expressed his shared excited for me! I’ve since brought the set home and have begun the building stages. My coffee table has been converted to a lumber yard of LEGO parts as you can see below. I’ll probably post a cool video later of the build process to the final completed house! 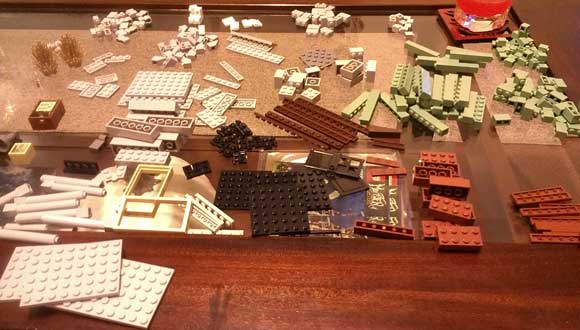 Well I think this is a wonderful story to kickoff the Ghoulie Guide’s Halloween season of posts! I highly recommend going out and getting your very own LEGO set of Monster Fighters toys! You will definitely have fun putting together your set. Each set comes with SUPER easy to follow instructions. (Except for the Dracula cape…still can’t figure that one out). Oh and mark your calendars! As part of the LEGO Bricktober promotion, visit a participating Toy’s R Us store on October 27th (12 – 2pm Eastern time) to Get a FREE LEGO Monster Fighters accessories pack and help to build a spooky city! Have fun creating…muhahaha!