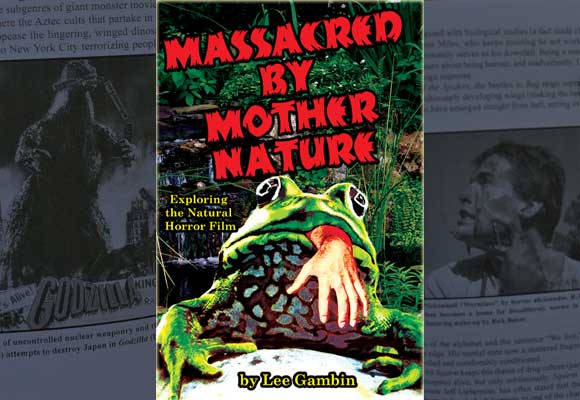 During the 1970’s, there were lots of movies about killer animals, insects and arachnoids. This genre included lower budget films like Squirm (killer worms), Kingdom of the Spiders, and Ben (killer rats) as well as high grossing, successful films such as Jaws (1975). With the emergence of the nature-gone-amok genre, it became evident that any of God’s creatures could potentially become monsters. Finally someone has taken this genre and has broken it down for us mere mortals. Lee Gambin (a regular Fangoria contributor) has written a book called Massacred by Mother Nature in which he explores the subject of the natural horror film. He discusses films of the 50’s (Them!, Tarantula, King Kong), the 60’s (The Birds), and then catapults into the 70’s of which there are many films to discuss! The book is not an encyclopedia of movies, but instead is written in an entertaining and informative style. There are horror celebrity interviews, lots of great illustrations and movie posters.