Sometimes great things can come from procrastination. Case in point, my Halloween costume. I didn’t have one. It was a crazy month and I never got time to even think about what to be this year. My plans were to take my little four-year-old cousin trick or treating. I was kind of happy this year was going to be more relaxing without having to worry about a Halloween party or costume. Thing is…I LOVE HALLOWEEN. That’s kind of obvious or this website wouldn’t exist. So how could I not have a costume to show my little cousin. After all I want her to have fond memories of Halloween night just like I did when I was a child. So after watching a few youtube videos for inspiration, I made the coolest Halloween costume in my neighborhood, a Glowing Stick Figure. And it only took 5 minutes to make! Enjoy the video below and read on to see how I made it.

So I watched a few videos of people (and a baby) as glow stick figures. While I was showing the baby video to a coworker, he started looking up the parts on Amazon and found vendors selling rolls of led light strips. There are several types you can buy but the ones we chose were 16 feet long, had a remote control for various color options, and a power pack that plugs into the light strip. I think this is the one we purchased: RGB LED Light Kit. 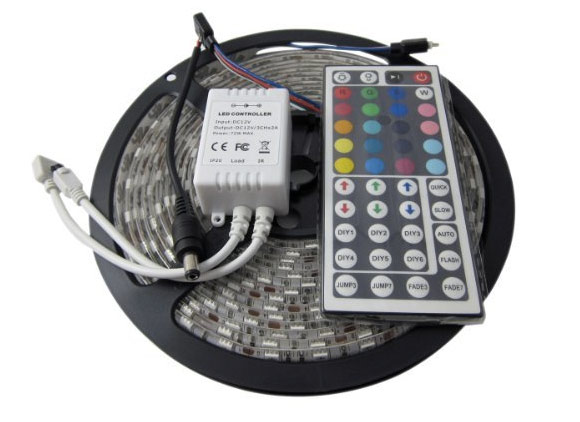 He had Amazon Prime so we had two day shipping. Fortunately the kit arrived in the mail October 30th. As the sun was beginning to set on All Hallows Eve, I pulled out the LED kit strip started taping it to my black sweater and pants then plugged the power pack in. This kit requires a 24 volt battery, but I only had a 9 volt. Fortunately it still worked! And it glows soooo bright! The remote control let me change the color from green to red to blue. There are even effects like fade transition, jump, flashing, etc. However, green seemed to look the best.

As I made my way around the neighborhood, trick or treating with my family, I started to notice a lot of people begin to gather around to look at my costume. The people giving out candy were super surprised by my costume as well. I think my little cousin received twice the amount of candy she should have gotten just because people were so impressed by my costume. It was fun, and my brother cousin and I are now thinking to take it up a notch next year and do a family of glow stick men.

Here is one of the videos that first inspired me to make the costume!