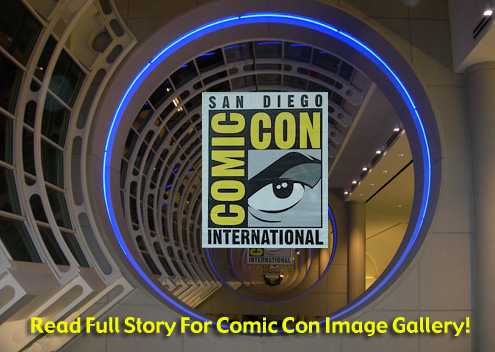 Well, another year of Comic Con has come and gone. The convention goers have packed up their rare comics, new toys, mangled costumes and random swag and headed for home. For those of you that are wondering what you missed, I’m here to give you the scoop. Yes, a week late, but it took me that long just to go through all the flyers and free stuff I collected! You may have already heard about some of the post comic con buzz, but I’ll give you a unique look at some of the stuff that you would have seen if you spent two days roaming up and down the convention hallways.

It was a HUGE year for parties! If you were in town on Thursday or Friday night and you were lucky enough to be invited to one of the dozen or so private parties, you’d probably still be recovering from all the excitement and alcohol! I wasn’t able to make it down till Saturday, but I heard Peter Jackson’s private party was off the hook! Hollywood always shows exclusive movie screenings at Comic Con. Among those this year was Peter Jackson’s “District 9”, the halloween horror flick “Trick r Treat”, and Walt Disney’s long awaited sequel “Tron Legacy”.

You never know who you’ll see wandering around the convention. After all, celebrities like to check out the con too! It was rumored that Peter Jackson might roam around the con dressed in a stormtrooper costume, and yes he does own one. Elvira was signing autographs on Saturday, but I missed her! She wont get away from me next year! Here are a few of the people I did see. Adam West explains the life of a superhero Saturday seemed to be a great day to wander through the main convention floor since lots of people were busy with screenings, panels, and autographs. Sunday, however, became a mad dash to find all the free last minute swag you could get. Our good friends at FEARnet were giving away free USB drives where you could download free horror films and trailers. Xbox had all kinds of giveaways including lanyards and T-shirts. I love discovering those rare gem booths that I’ve never seen before. This year I found Bard Sculpture Studio. Absolutely incredible art sculptures from Damon Bard. Also, Dr. Grordbort’s display of ray guns, death rays, beam guns, blasters, laser guns, and phasers was incredible. These science fiction weapons were created with such incredible detail that they looked as if they could actually blast something. Right on the other side of the display were some crazy alien type creature head mounts (possibly hunted using those very weapons). Another notable finds was the Star Wars Science display where you could test out your mental powers and try to raise a ball in a tube with only your brain waves. FOX had electric chairs set up so you could preview a montage of some of their recent horror films. It looked really cool, but I was hoping they would give everyone a slight jolt at the end of the trailer. Close up detail of a photon phaser Some of Dr. Grordbort's recent conquests Entrance to Castle Grayskull. I have the POWER! As always there was an abundance of costumed people at Comic Con. Its almost like an early Halloween without the candy. I’m always amazed at how creative people are and I’ve seen some incredible costumes over the years. You’ll see everything from superheros, comic book characters, sci-fi movie characters, horror creatures, to downright weird costumes that defy explanation. Here are a few of the ones I saw this year. A fully functional R2D2, beeps and all That's the toughest a flower can look. He's trying. Not too friendly to us humans Plenty of security at the Star Wars Pavilion One of the coolest things about Comic Con is the toy previews. Granted, these toys can be really expensive and some are even collectors items. But for the child in all of us, its fun to check out what will be on the market shortly. Franky looks a little tired after a night of fright This is how I look when I'm craving chocolate Ghostbusters is making a comeback. It's Slimer. Who lives in a pineapple under the sea? The biggest worry wart of all time…C3P0 Vader without the mask…someone needs a tan

Hope you guys had fun and I cant wait for next year’s Comic Con!